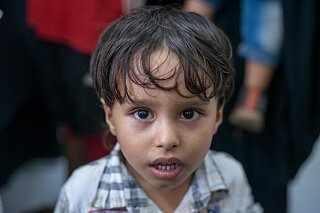 Our 2020 Christmas Eve offering supported relief efforts in Yemen. Yemen is the largest humanitarian crisis in the world, with more than 24 million people – some 80 per cent of the population – in need of humanitarian assistance, including more than 12 million children.

Since the conflict escalated in March 2015, the country has become a living hell for the country’s children. Now, with COVID-19 spreading, Yemen is facing an emergency within an emergency. Sanitation and clean water are in short supply. Only half of health facilities are functioning, and many that remain operational lack basic equipment like masks and gloves, let alone oxygen and other essential supplies to treat the coronavirus. Many health workers are receiving no salaries or incentives.

Meanwhile, acute malnutrition rates among children under the age of five are the highest ever recorded in parts of Yemen, with more than half a million cases in southern districts.

Yemen is located in the mountainous south and southwestern portion of the Arabian Peninsula and the Indian Ocean island of Socotra.

Yemen was once famous for frankincense, myrrh and coffee, but now growing the mild narcotic qat dominates agriculture. The Christian presence is less than 1/10 of 1%.

Christianity once had a strong presence, but was almost completely wiped out by the 7th Century Muslim conquest. According to tradition, Shem founded the city of Sana’a, and the Queen of Sheba reigned in Yemen and sought wisdom from Solomon three millennia ago. May the modern people of Sheba seek after the wisdom from God as promised in Isaiah 60:6.

CFC has partnered with an organizaton on the ground providing relief in Jesus name and all this is happening through local Yemenin church leaders.

100% of your giving went to Yemen relief!

Watch the 4 minute BBC video below to see first hand.